What is Living History? 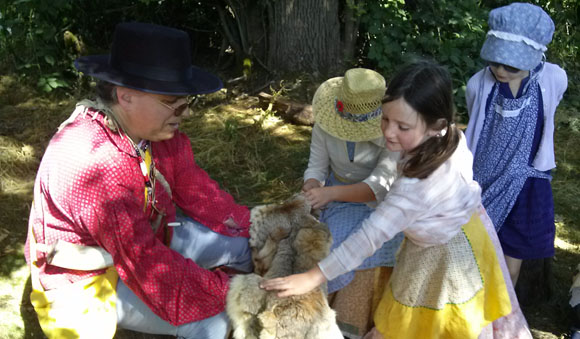 Singing Creek Educational Center is a member of ALHFAM.

So What Is Living History?

Living history in a museum setting began with the formation of open air museums, an approach to collecting, exhibiting and interpreting that dates back to at least 1891 when Skansen opened in Stockholm, Sweden. The museum founder, Arthur Hazelius, collected the material culture including the buildings and practices of a pre-industrial era — a folk culture in a rapidly industrializing world. Similar goals guided industrialists such as Henry Ford who privately funded the development of Greenfield Village in Michigan and John D. Rockefeller who funded Colonial Williamsburg in Virginia during 1929. The practice of living history gained credence during the new social history movement of the 1960s and 1970s, and bicentennial fervor helped make costumed interpreters synonymous with vibrant programming at museums such as Plimoth Plantation, Old Sturbridge Village and Colonial Williamsburg.

Living history means different things to different people. Jay Anderson identified three major groups of living historians in his seminal Time Machines: The World of Living History: those who interpret how people lived, those who use living history as a research tool to test theories and explore material culture, and those labeled “history buffs” who create personas for themselves based on a past person or blend of persons.

There are many criticisms and debates surrounding living history because of its multiple dimensions. Not everyone looks favorably on living history as a teaching technique. Critics argue that living history is antiquarian, idyllic, or downright misleading. ALHFAM responds to critics by distinguishing between a past that cannot change and the interpretation of the past which is always changing. ALHFAM affirms Scott Magelseen’s argument that living history museums produce history just as teachers do in classrooms, authors do in monographs, and directors do in film.Not all living history farms and open air museums operate at the same level of authenticity. Yet, a site that incorporates historic objects, accurate environments and appropriate recreations can make the stories about the people who used those objects more multi-dimensional and effective. In the effort to “contextualize” their history, some sites try to recreate a particular time and place in the past, ignoring the intrusions of the present. The missions of various living history sites may make it difficult to be so exacting, but the effort to bring history to life is evident perhaps in living animals and plants, in staff performing historic work or trades, and in the effort made to provide an environment rich in artifacts that focus attention on life in past times.

ALHFAM welcomes anyone interested in and seeking more information about historic reenacting, heritage breeds, seed cultivation, traditional foodways and other folk practices. ALHFAM also serves living history interpreters, who are paid and unpaid staff who wear period clothing and engage in tasks appropriate to a specific time in an authentic place. ALHFAM exists to help living historians develop the best history possible and to be effective stewards of living history, farm, and agricultural museums. ALHFAM provides resources to help living historians increase their understanding of the past and translate their understanding into effective museum interpretation. Living historians use many different pieces of historic evidence including the written word, material evidence (tangible things such as buildings, landscapes, objects and plants) and folk culture (intangible heritage that can include recipes, rituals, stories and ways of doing things). Furthermore, living historians in museum settings must be conscious of best practices in museum management & ethics, collections stewardship, and museum education, interpretation and public programming.